vSphere Integrated Containers Engine is a container run-time for vSphere, allowing developers familiar with Docker to develop in containers and deploy them alongside traditional VM-based workloads on vSphere clusters, and allowing for these workloads to be managed through the vSphere UI in a way familiar to existing vSphere admins. 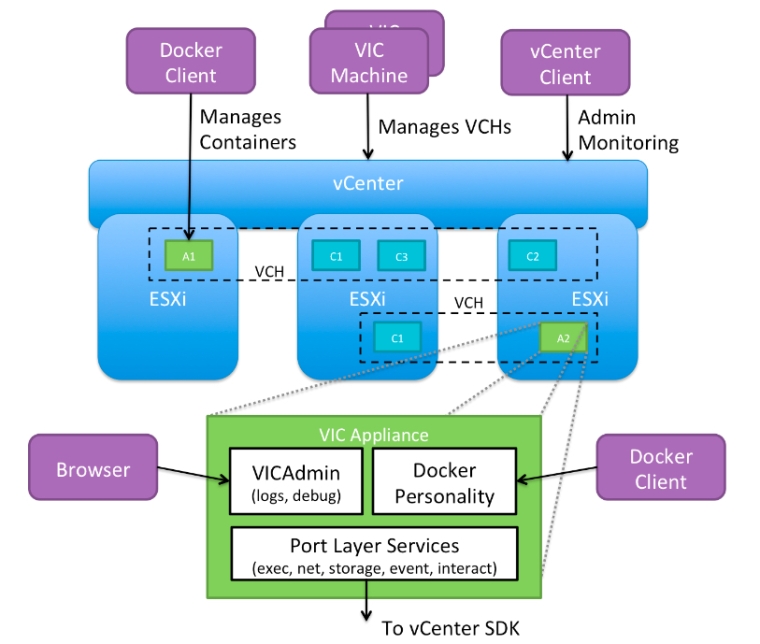 Now that we are done with the intro, we will only be focusing on VIC Engine in this post and how we can leverage vRealize Automation 7.x to make it even better and faster to deploy by users as a service.

I have been playing with vSphere Integrated Containers for a while now and since the early beta days. I can tell you that deploying and deleting the VCH Endpoint so many time was a bit painful since the command line is so rich including so many parameters that you can choose from where some are mandatory and some are optional, which of course can be a bit overwhelming specially when you fat finger some of these parameters as often as I do.

Example of the Linux command line with some of its parameters to deploy a Virtual Container Host on vSphere, looks something like this :

During all this testing time I had to save the entire command line in a text file with all of its parameters, so I can simply copy and past the command when I need to, after replacing some of these parameters with the values I wanted to use, so I don’t have to type it over and over every single time I decide to deploy or delete a Virtual Container Host to test.

Having in mind our main use case for vRealize Automation and that is IT Automating IT , I wanted to find a way where I can somehow provide this as a service in my home lab where I can simply select the service and submit the request from the catalog.

Well, I did that some time ago and today I m excited to share that publicly on my new blog with all of you out there !

So please sit tight, enjoy the ride as I Explain…

In vRealize Orchestrator I managed to leverage the Guest Script Manager to take the command line with the majority of its parameters and automate the life out of it by creating the desired workflows use cases ( The Creation and Deletion of the VCH process ) then use these workflows as Anything as a service XaaS type blueprints in vRA to essentially present it as an item catalog where users can easily request to create a new VCH or delete an existing one.

Of course there are many other ways on how you can do the VCH automation piece and probably even better than the one I’m sharing here, but this is simply how I did it!.

1. Request the Service from the Catalog 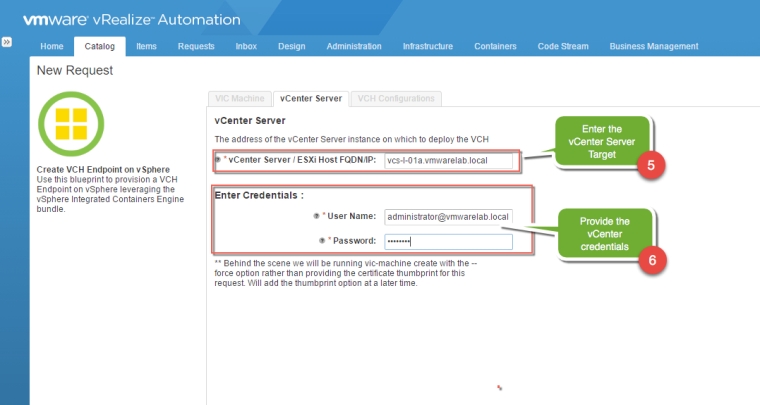 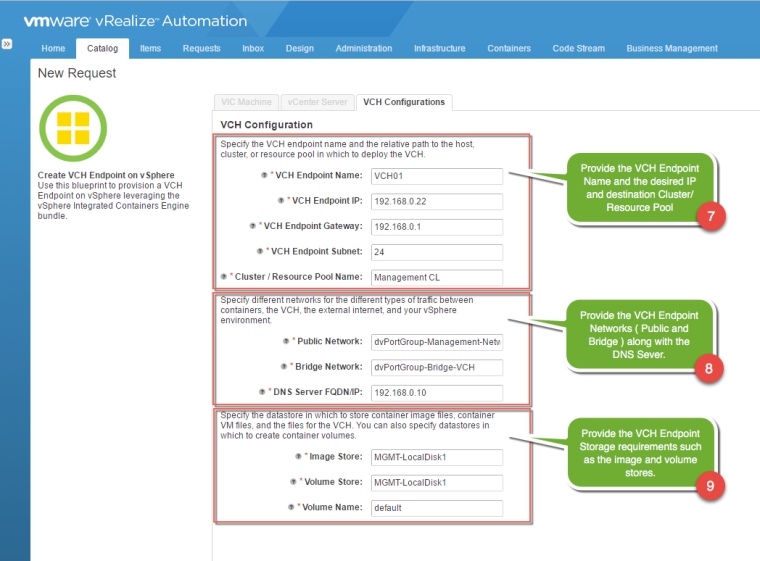 4. Provide the VCH Configuration needed for the deployment

5. Workflow executes in vRO to deploy the VCH endpoint on vSphere

This is so great on so many levels since now you can easily entitle any development groups for example, that really don’t have to know a whole lot on how VIC works and are simply able to request the service to access a docker API and provision Containers.

You can also wrap an approval / governance policy around it which vRA can easily provide and have all the parameter’s values available to users in drop-down list format within the XaaS Forms on the request page, so the requester don’t have to wonder when filling out these form requests, things like which cluster I should be deploying this to, What network I should be selecting, What Storage I should use and more importantly standardize these inputs to avoid typos to standardize the service overall so its consistent across the IT organization.

I tested both XaaS blueprints ( Create and Delete VCH ) and both works like a charm. I still though have to clean it up a bit but I will be sharing both the vRO package and the XaaS blueprints here on this post so others can use it or build on top of it and make it even better since I am not really an expert when it comes to developing vRO workflow but I m doing my best to learn even more.

Please be aware that this has not been tested yet outside my lab, so please provide feedback if you have any issues, in case I need to tweak things :

Please make sure to map the right VCH Automation package version with the right VIC Bundle version since some of the command syntax changed in VIC 1.1

The Create Command Used in the Create Workflow for VIC 1.0

The Create Command Used in the Create Workflow for VIC 1.1

You notice if you compare the create command between the two versions that some of the parameters were changed. i.e.  –appliance-cpu  renamed to –endponit-cpu